Just wanted to relay a quick story about Jeremy's visit to my parents' home the Saturday after Thanksgiving. I stopped by and picked Jeremy up and was very impressed that he was able to get in and out of our very tall van (Chevy Express). It was slow-going, but Jeremy was able to get in and out of the van twice. I have to admit, I was nervous watching him get out, as it was about a foot drop from his dangling feet to the ground. Jeremy only had a slight slip on the way out, during which time he had quite a death grip on the door of the van and the seat. But he managed to recover without falling.

During the visit, we had some great conversation and food. The part I have to mention though was my 5-year-old nephew, Noah, pictured here: 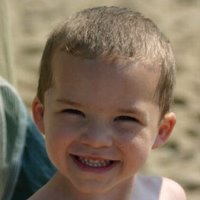 When we got there, Noah's eyes were fastened on the TV, which is pretty normal for him -- he has an incredible way of blocking out everything around him when he's watching TV. But when Jeremy came walking into the room (the entrance is right by the TV), little Noah looked up, saw his prosthetic legs and shouted "Cool!" He then proceeded to follow Jeremy like a little puppy, watching closely as Jeremy maneuvered up 2 steps and sat on a chair in the dining room. Then the questions started. "What happened to your legs?", etc., etc. After Jeremy told him everything, he said "but where are your legs now?" to which Jeremy replied "They're gone." Noah's eyes got big and he said "They disappeared??!" :-D

Jeremy handled all his questions and comments with a lot of grace and patience. He even held it together when Noah matter-of-factly told him: "You look like one of my Bionicles, except you have a face." I'm sure at this point, my sister was wishing Noah was still watching TV. :-)

Noah also brought Jeremy food -- anything he could get his little hands on. According to my Mom, at one point he came walking up to Jeremy and handed him about 1/2 of a teaspoon of jello on a spoon. :-)

I've gotten back a few pictures from the visit, but I'm waiting on the 2nd roll, which has a couple of pictures of Jeremy standing. I'll post one as soon as I can.

Thanks for letting me temporarily hijack the blog.

Comments:
Jeremy,
It was great to see you that day! Thank you for being so gracious to Noah. I seemed to have little parental authority over his desire to talk to you -and fufill your every food-related wish. You were his real-life Robot Man that day! He prays for you every day - but with new vigor, now that he knows exactly who "Cousin Jeremy" is. :) Remebering of course that he still confuses Aunt Heather and Aunt Minda.
Love you, Jeremy!

Kids keeping it real for all of us...
I'm sure Noah has a new perspective on "robots" now...

And you can now be grateful that, unlike those store-bought robots, you don't have anyone trying to maneuver you with a remote control!