At Last I Have An Apprentice! 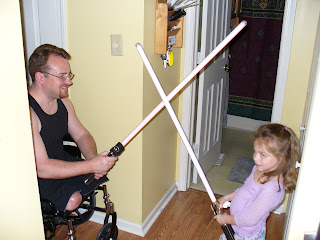 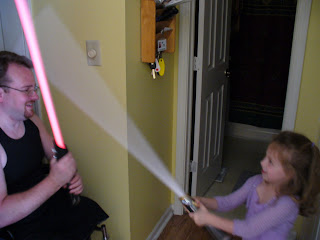 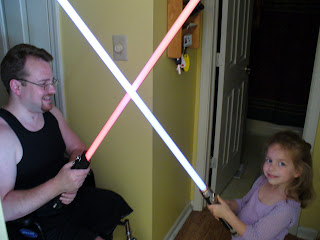 Madeline and I have had some very precious bonding moments over the past few weeks. As Sarah mentioned in the comments from last weeks blog, I failed to mention that she sat next to me on the flight from Amarillo to Fort Worth. We had a great time, although I was mentally exhausted by the time we landed in Fort Worth. (And it was only an hour flight!) She's so very inquisitive that by the time we landed my mind needed to rest for the next leg of the trip. Honestly, I don't know how Sarah does it!

One of the most entertaining moments of the trip was when the first flight (from Indy to Fort Worth) lifted off the ground. Madeline had a huge smile on her face, lifted her arms over head (as if we were on a roller coaster), and then wanted to know when we were going to fly over the clouds. She enjoyed every minute of it!

I was called in to work this past Saturday night so, since I didn't get home until after midnight, I didn't go to church on Sunday. (apparently some members of the congregation were very concerned) Normally Sunday is the only day of the week that I get to see Madeline so I was a little disappointed. However, she and Dad came over Sunday afternoon so that Dad could spread some mulch in the backyard. That's when these pictures were taken. I have long hoped to get Madeline interested in Star Wars, looks like I'm finally making some progress!

Nice light sabers. Sara can't go into Border's without hitting me with one at least once. She loves those things.

She hasn't made it to the dark side yet..good for you!

Hooray! Someone else with multiple sabers in the house.
My boys usually get these taken away every day. We have watched Star Wars and half of The Empire Strikes Back in the past 2 weeks (Dad was out of town so we have been paused for a while.)and of course every time we sit down I think of you...and the time you forced me to watch all the movies and I kept falling asleep.
Sorry about that!
Now I have Matt to kick me when I start to fall over, he's almost as good at it as you were.
Looks like you have a small window to influence her taste. Go for it,
she can always have therapy later. I know mine will!

I have loved reading your entries and love it when you add pictures too! It helps me get used to you being all muscular and manly!