Christmas morning began with my neice sneaking into the room I was sleeping in at my parents house and waking me up. I grabbed her and pulled her into a big hug and wished her Merry Christmas. Madeline has been dealing with an ear infection, but she hasn't let that darken her mood this holiday season. In fact, I think she was more excited about this holiday than she has been for any other. Because, this year she was visited by both Santa and the Tooth Fairy! (She lost her first tooth on Christmas Eve.) When asked how she was staying in such a good mood even though she wasn't feeling well, she replied: "Because I'm getting gifts and money on Christmas!"

The family quickly gathered by the tree and watched as Madeline (the youngest) passed out the gifts. Then we opened them in order of youngets (Madeline) to oldest (Uncle Mike). Everyone was thrilled with their gifts and then we headed to the dinning room for breakfast. Now breakfast is over, and the family is in the process of getting ready to go visit Grandpa at his assisted living community. After that it's back home for Christmas dinner wih some of Mom and Dad's neighbors. It's going to be a busy day, but my hope is that it will be a relaxing day as well. I also hope that everyone of you, Christian or not, have a wonderful day and holiday season!

I tried to attach a video clip of me walking up a ramp at Wishard during therapy today, unfortunately it didn't work. Earlier in the session we worked on stepping off a curb (something I've been having trouble with) and going down a short ramp (end of side walk). These are two maneuvers that will need to be done sideways if I'm using the canes. The end of the session was walking down a longer and more shallow ramp. Unfortunately there's no video of this because Renee was holding onto the gait belt (silly thing wrapped around my waist). I'm able to walk down a long ramp going forward, but I have to go slow. If I go sideways it takes less time because I can take wider steps but I prefer to see where I'm going.

Here's the update on my friends. Unfortunately they lost the baby. At this point the prayers need to be for my friends wife. That she be okay and have no serious side effects. And that they both stay strong throughout this period.

Sorry I'm so late this week. I've been having technical difficulties at home and work has been too busy for me to do an update from my office. There's not much to report on my end right now. I have physical therapy tomorrow so perhaps I'll have more after that. For now though, I need to ask for prayers for some dear friends of mine.

They've asked me to keep their anonymity, but here's what's going on. These friends, a husband and wife, are about 8 weeks pregnant. Or at least they were. She miscarried at the beginning of the week. They think it was a twin because the doctor thought they saw another baby when they did the ultrasound after the miscarriage. Unfortunately they couldn't hear a heartbeat and there is a large blood clot that is causing a problem. (I know I'm not describing this all that well, because this is not an area that I have much experience in.)

They are going back to the doctor today and the prayer is that they will hear a heartbeat, that the mother will be ok, and that the issues with the blood clot will be gone. Please focus your prayers and positive energy on my friends as they go through this day. I feel awful that I haven't been able to get this info out there for everyone before now. Even if you see this after today please pray for their health and emotional well being.

We know that everything will be ok. What's supposed to happen will happen. It's an easy thing to say, but can be difficult to embrace. The more support we can send their way the more they will be strengthened.

I'd love to say that walking with canes is easy, I'd love to say that I'm able to do everything with the canes that I can do with my crutches. Unfortunately this is not the case. As I've said before it's almost like learning to walk all over again. The exertion causes my back to hurt, I sweat profusely, and I can't go nearly as fast as I can with the crutches. (I move like an 80 year old man!)

I've been practicing with them since last Friday, November 30th. Mostly at church and at work. On a flat surface I do pretty well (tile is easier than carpet). I'm even able to go over a curb (up), up and down stairs, and increase speed slightly. Going up an incline is no challenge at all.

However, going down an incline is extremely difficult. I almost fell last week at therapy when I attempted to go down a ramp. In order to avoid falling I had to turn into a wall and Renee had to stabilize me before I continued on. I almost fell at work while walking in the restaurant. I'm not really sure what happened, one minute I was walking fine, the next minute both legs were going opposite directions. I caught myself but my housekeeping supervisor was scared out of her wits!

At church this Sunday I tried to step off a curb. The canes didn't give me the support I needed and neither did the legs. As I was stepping off the curb I lost my balance, dropped a cane, and had to grab my father to avoid falling. Dad's been having back issues so I'm sure this didn't help him.

Later that day I went to visit my Grandfather with my cousin Chuck. On the way out of his building there's a very slight slant down towards the parking lot. (When I say very slight I mean minimal, almost unnoticeable.) Half way to the car I couldn't walk any further. I'm not sure why, but I just didn't have the balance to trust that I wouldn't fall if I took another step. I asked Dad to get my crutches from the car. As soon as I had the crutches on my arms I was able to walk comfortably at a normal pace, as if there was nothing wrong at all.

The fact is, walking with the canes is scary! I realize some of this is in my head. Before getting the C-legs I was prepared to fall, and it happened at least once a week. Since I've had them I haven't fallen once. Now I've almost fallen three times in the last week. The other part of this is that every time I've walked outside with the canes it's been either raining or wet from recent rain. The conditions, the physical exertion, and my own fear make it very difficult.

With all this in mind, I haven't fallen yet, only almost fallen. I'm continuing to practice with them and this obviously justifies continued physical therapy. (Renee was talking about discharging me the last time I was there.) I've also noticed a marked improvement in the way I walk with the crutches since I started practicing with the canes. Interesting, huh? 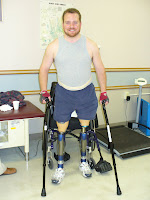 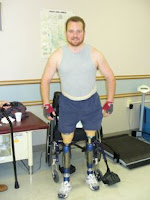 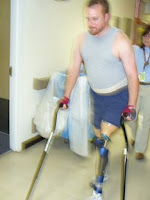 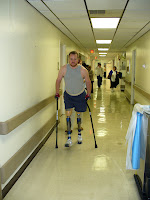 As Judy aptly noted, I've missed a week, almost two. In the last two weeks we opened our new restaurant at work. This has taken up a lot of time. I did take several days off around Thanksgiving. Not sure why I keep thinking that I'll get some rest when I take several days off at once. I spent the bulk of the time with family and friends. I had a great time, just not much rest.

Mark Hatfield and his wife Lauren were in from Minnesota so I spent a lot of time at Mark's Parents house. When we were in High School we hung out at Mark's house all the time so it was kinda like going back in time! On Thanksgiving Mom, Dad, Sarah, Madeline, and I had dinner at Mom and Dad's house. After dinner we took food to Grandpa and spent some time with him. Then we took Madeline to see Bee Movie.

Earlier in the week I got a deep tissue massage. It was the first massage that I've had since the accident. The massage therapist was amazed by how tight my muscles were. She told me to let her know if she went too deep. Unfortunately I didn't take into account my high tolerance for pain. I felt great after the massage until about 4am when I woke up feeling like a herd of elephants had run over my back! However, after the soreness wore off I was back to feeling great! I'm going back for another massage on Tuesday.

My balance continues to improve. I'm able to stand without the crutches comfortably for a few minutes before I sit down. I got my canes in Physical Therapy yesterday. Walking with them is becoming easier, however, we still haven't practiced any obstacles yet. I tried walking down a ramp and it was extremely difficult and scary. I didn't fall, but I probably would have if Renee hadn't been there to support me. Let me know what you think of the pictures. Especially the one where I'm standing without any assistance.