Today marks the third anniversary of the accident. The ripples in the water of my life, caused by that event, continue to alter my existence. Who am I? Why am I here? Why was I saved that night, when a split second would have changed the outcome? What is the true path that I am meant to follow?

These are the questions that I ask myself as I look back on the past three years, and forward to the future. To be honest, while I have fond memories of the deeper (pre-accident) past, I don't spend much time reflecting on that part of my life. In many ways that person died on October 22nd of 2005. (Some unsubstantiated reports even suggest that I physically did die (several times) that night.) My life has changed in more ways than even I realize by the events of that October night.

Gone is the young man whose only goal that night was to convince a friend to put on a costume and join him for a Halloween Party. (A party that, as we all know, I never made it to.) Gone is the detail oriented manager who enjoyed the most stressful and hectic moments of leadership. Gone is the man who cared if every guests food was served on time, or if they had enough shampoo in their rooms. Gone is the man who...

That statement could go on and on. With all that stripped away, and so much more, what was left behind was a man who had his relationships, and core values, to cling to. And the fact is that my life had been so ingrained with corporate culture BS that I wasn't even sure what my core values were anymore. I tried to return to the life I had led before, only to discover that I no longer belonged in many aspects of that life. Were it not for my family, friends, and new friends who came along the way (my support system, if you will) I would not have survived.

At the beginning of this year I was still trying desperately to hold on to what had been one of the most important parts of my previous life. The reality, however, is that I now know that I never should have let that part of my life become as important as it was. My career was all consuming. A 24-7 beast that invaded every part of my existence. Indeed, it was on my way home from the job site that the accident occurred. I really should have paid attention to the message in that!

Did I pay attention? No, quite the opposite. From the moment I awoke I asked when I could return to that beast. Somehow still thinking that it was where I belonged. After all, I had landed my dream job just six months before the accident happened and I still wanted it. What I didn't know was that my dream job had become far less than a dream. For some reason I had it in my head that when I returned it would be as I left it, but the reality was that, in my absence, it was changing as much as I was. I tried to hold on to it, but I have to admit that I was miserable, and no amount of effort could ever restore the dream.

So, now I no longer have that career, I'm facing potential unemployment in the coming months, I must find a way to support myself, and I have to figure out the right course to proceed with my life. I AM NOT AFRAID! Let me say this again: I AM NOT AFRAID! This is the path that I am meant to walk now. I have my support system around me and it is ever growing. My head is clear, my spirit is open, and with every new trial I grow stronger. The questions that I ask myself I will always ask, and the answers will frequently change.

Today, on the anniversary of my survival, these are my answers: Who am I? Someone different to everyone I know, or will know, but to me I am simply myself. Why am I here? To experience life, help others to experience life, and hopefully learn something along the way. Why was I saved that night, when a split second would have changed the outcome? Divine intervention, for reasons unknown to me, that hopefully I will instinctively satisfy. What is the true path that I am meant to follow? The path that, while it may be difficult and scary, makes me happiest and feels right to me. This is why I AM NOT AFRAID!

(I will admit, now that I am done typing this, that there are tears in my eyes. Tears for the man who is three years gone, and all the unfulfilled hopes and dreams that he left behind, and tears of joy for the man who survived, and anticipation of the experiences he will have on the path he now walks.) Tonight I am having a small gathering of people, supporters (some new, some old) over to celebrate my survival. After you read this, please lift a glass (wine, beer, soda, water, or milk) and join me in a toast to the man, both past and present, who is three years gone from that momentous night. Also, please join me in a toast to yourself, and the others like you, who continue to support me, as it has not escaped my notice that the ripples in the water, caused by the accident, continue to effect each of you as well. Now, I ask you to join me in one third and final toast, and please, say it loud and strong: I AM NOT AFRAID!

A Day with the Horses! 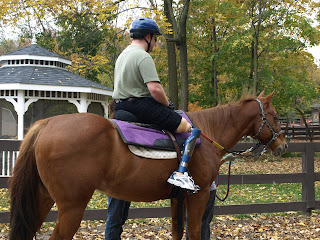 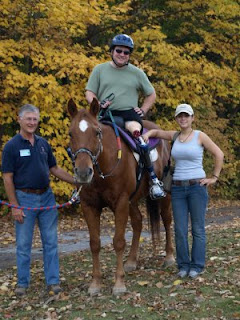 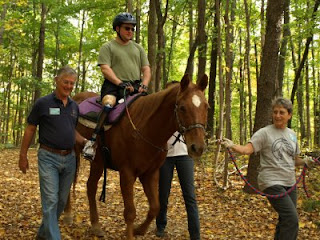 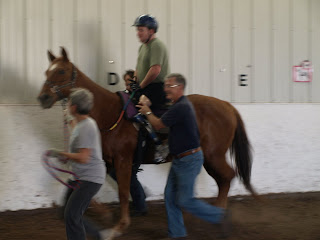 The high point of my past week came on Wednesday. All in all it was a good week, but Wednesday was the best day, with Friday being a close runner up. What made Wednesday so special was that I got to pick Madeline (my niece) up from school and spend the afternoon with her. It was the first time that I've driven a car with her in it since before the accident! I never went over 30mph on our drive home!

I mentioned that I was driving slowly and she asked why. I told her that I had a special package in the car. She asked "what is it?" and I responded "you!". She giggled. We went through the drive through at Dairy Queen on the way home. Once inside her house she had to take two more trips to the car to get the food, and her stuff. It was fun to watch her climbing in and out of my car and trying to get as much stuff at a time as possible! She did her homework while I ate and then we played some board games and the Wii until her mommy came home to take her to gymnastics. We had a great time!

Thursday I had a follow up with Dr. Ertl. My appointment was at 10:45am. I didn't get out of there until 2pm! The visit was worth the wait though. Dr. Ertl was very pleased with my progress.

Friday was a big day. I had Physical Therapy in the morning. I stood for just over two minutes without holding on to anything! That's a big improvement, considering that I could only stand for about 30 seconds before the last round of surgery. We also decided to try walking with one crutch again. I had been able to do this before the surgery in May, but it was very uncontrolled and I had to put my left leg into a different mode. This time we tried it with both legs in their normal mode. It was much more controlled, and a lot easier! Of course, it's still not as safe as walking with both crutches, but at least I know I can do it. Both of these things are a big steps, and show how much my balance has improved!