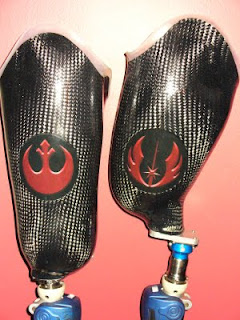 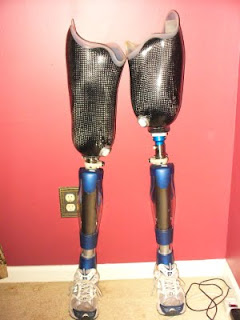 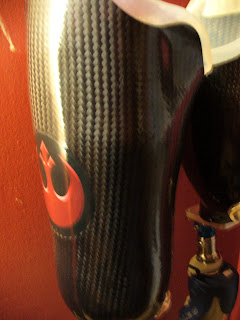 When I think about the fact that during this period of time in 2005 I was drifting in a medically induced coma, and can never regain that time, it makes me cherish this period of time from late October to early December so much more! I had a realization recently that, in a way, I've begun measuring my year off the date of the accident instead of New Years Eve. For some reason I feel renewed after October 22nd. Some of that may have to do with the fact that we have had amazing weather lately and it's felt more like spring than late fall. Some of it may also have to do with my new sockets (pictured above) that I got a little over two weeks ago. Perhaps some of it may also have to do with the fact that I attended a Burn Survivor Retreat the weekend before the accident. Whatever factors contribute to it, what's most important to me is the feeling that I've been given another year to explore this thing called life.

As you know, this year I recognized the anniversary of the accident by walking in the Easter Seals Crossroads "Walk With Me" fundraiser. It was a rainy evening, but the rain held off long enough for us to get in the 2 mile walk! (it drizzled on us for a while, but I found the drizzle to be quite refreshing!) I wish that I could say that I walked the entire 2 miles, but the truth is that I only made it about half a block before I had to sit down, add a sock, and reposition my left leg. I then walked for about a block and a half before my left leg started to rotate again. At that point I decided to use the wheelchair for the rest of the distance. I'm looking forward to seeing how much further I will be able to walk next year with the new sockets!

I received the new sockets the following week. They make such a difference in the way I walk that decided it was time to return to the Walden Inn & Conference Center for a visit. For those of you who don't know, the Walden Inn is where I was working when the accident happened. I hadn't visited my old staff since shortly after my position was eliminated. (Approximately two and a half years after the accident.) It was great to see everyone and I even managed to fit in lunch with one of the people who had rescued me from the burning wreckage of my jeep!

The following week was spent experimenting with the new sockets. I also spoke to the Fourth Grade students at New Britton Elementary School in Fisher's for their "Every One Counts" week. "Every One Counts" is a national program to educate students about the abilities of people with disabilities. The students asked some very astute questions and were a great audience!

My goals for my "new year" are pretty personal in nature. Some I will need to keep close to the chest for a while longer, but there are others that I can share with you now. Of course one of the top goals is to do whatever I can to help Congressman Carson's office promote H.R. 3088! (There is work going on behind the scenes. I promise to keep you updated when something happens!) Another continuing goal is to improve my ability to walk. (This is the one that will require the greatest physical effort!)I would like to get to a point where using one crutch on a daily basis is fully functional. My Prosthetist's goal for me is to walk without needing any crutches at all. Now, I have some safety concerns about that, but I would be happy to have the ability to walk without crutches and make the choice to use one crutch (or cane) for safety reasons. (For the record, I can walk pretty well with one crutch, but I've never tried to maneuver around/over obstacles without using both crutches.)

My new sockets provide me with improved stability and control while walking. I'm still having some issues standing without holding on to anything, but that just requires more adjustments to the alignment and continued balance work on my part. These are suction sockets, as opposed to my old pin-lock sockets, which provide a stronger connection to my residual legs. They are made out of a carbon-fiber weave, which is what gives them their unique look. (From what I understand most carbon-fiber weave sockets are usually entirely covered with some type of fabric.) The sockets are actually black, but the way the laminated weave reflects light almost makes them look like a black and white checkerboard pattern.

The first picture shows the images or "tattoos" that I chose to have laminated into the sides of the sockets. (Getting these images onto fabric was what led to my fall at Joann Fabrics!) The first picture also shows the distinct difference between how the sockets are aligned. Notice that my prosthetist made the left socket to account for the shortened tendons and muscles in my left hip. (He's actually aligned that socket so that it will stretch the tendons and muscles as I walk!) The second picture shows how my legs look from the front when I wear them. (Usually with shorts over them!) The third picture gives a better example of what the carbon-fiber weave actually looks like without the relection of the camera flash. (As you can see, even without the flash, the right socket is still reflecting a lot of light from a nearby wiondow.)

The "tattoos" on the side of each leg are, of course, from Star Wars. The image on the right leg is the Rebel Alliance insignia and the left leg bears the Jedi symbol. These images have a double meaning for me because (from what I've read) they were inspired by the Phoenix. Somehow I thought it would be fitting to have a representation of new life rising from the ashes on each of my legs!

Comments:
Dear Jeremy - thanks for your update. I LOVE the Star Wars symbols on your new legs. Very meaningful and just so cool - too bad Mason is in bed already. He would have loved to see them. Enjoy your wk and yes, thank you for bestowing your brilliance and grace in our world. Happy wk! Hugs from the Griffyndores (I mean Griffins) :-)

Interesting about this seeming like a new year for you, but it makes perfect sense. Sounds like you have some challenging goals, but you have such a strong drive and a great support system, I just know this is going to be another banner year for you! Can't wait to see and hear it all unfold ...

So here's what I want to know. As the Star Wars expert, what is the BEST Star Wars related at-home video game?-If, you have a preference- Matt

To me that is amazing that they can take something that even NASA uses and make legs out of them...you are worth a billion bucks!! The "tats" on the legs are amazing and only you would think of something like that to put on legs. Keep smiling and laughing Jeremy because in the end that is all we have anyway is our laughter...
Love ya bro;
Marsha

OT, but I found out about today's Indy article in an email from David in Afghanistan! You can truly say you are "known around the world!" ;-)
Congrats on the tatts.
Florence