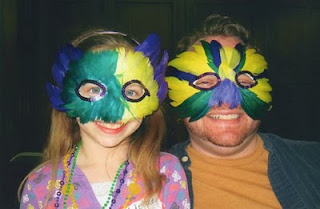 If you've watched the weather then you might have heard that Indiana, along with most of the country, had some record snowfalls and cold temperatures during the month of February. I've been pretty lucky to avoid being out in it much, but I still had a very active month. I had several speaking engagements and committee meetings that kept me busy, but I also found time to take Madeline to our Church's Mardi Gras Party. Her Mom wasn't feeling well, so she asked me to take her, and of course I jumped at the chance. (Figuratively, of course, man I would love to be able to really jump again!) That's the two of us in the picture above. You'll notice that I'm currently in "winter mode" which means that I tend to have a light beard and I haven't had my hair cut since October. The longer hair thing is a new experiment, because I don't really feel the need to maintain the "high and tight" professional hair cut right now. (Of course, the feathers have nothing to do with "winter mode" and everything to do with Mardi Gras!)

In the last month I've spoken to the fourth grade students at an elementary school in Noblesville, the 8th grade students at Immacculate Heart of Mary, and was part of a panel discussion about the psychological impacts of an acquired disability for a Physical Therapy class at UIndy. In between those events I also attended my regular Mayor's Advisory Council on Disability meetings, which includes two meetings now that I'm on the executive committee, and attended a meeting of the Board of Directors for the Indianapolis Resource Center for Independent Living (IRCIL). I have applied to join their Board, so I thought it would be a good idea to check it out.

Somehow the heavy snowfalls seemed to line up with days when I didn't need to leave the house. I kept an eye on the weather and would try to do my grocery shopping before the heavy stuff came so that I could enjoy being snowed in. I also managed to stay pretty healthy, until the last weekend. Then, somehow, it caught up with me! I got sick. I blame my sister. I blame her because she wasn't feeling well earlier in the month, so it has to be her fault, right? I know better, but what's the point of having a sibling if you can't blame her for making you sick? I remember when we were kids and she had the chicken pox. She got to stay home from school, so I chased her around trying to make her give me the chicken pox so that I could stay home too. I don't think she had told me about the awful itching that came along with it, so I'm pretty sure it was all part of her plan to give me the chicken pox in the first place! (Yes, I blame her for giving me the chicken pox, even though I was the one chasing her, that's a siblings right!) Yet again I have gone off on a bunny trail(most likely brought on by decongestants), so let me get back to the point. I got sick.

I try so hard to keep things positive, but when I get sick that becomes almost impossible. Why? Because when I'm sick I turn into this pathetic guy who wants to whine about everything and wants someone to baby him. The one big problem with that is that I'm single and live with two cats, who obviously could care less about what I want. When I'm sick everything becomes harder, every task takes longer, and it seems like when I'm finally comfortable on the couch I have to get back up to deal with something that I forgot while I was up the first time! It's when I'm sick that the fact that I'm single becomes extremely depressing. Every one deserves that special someone who will put up with them and take care of them when they feel like death warmed over, which is how I felt Thursday, Friday, Saturday, and most of Sunday. I'm still not 100%, but at least today I feel like I can do more than watch TV.

That was the whiny part, which has been aching to get out, so now it's time to look at the positives. I am very lucky that I have friends and family who do care. My old roommate brought me some much needed decongestants and movies to watch. Mom and Dad came by to help with a few things around the house on Sunday, and Mom brought breakfast over on Monday. The nice thing about being single when you're sick, is that you don't have to worry about anyone else seeing you when you're really gross! Luckily the timing worked in my favor again because, other than a meeting last Friday morning, I didn't have to be anywhere over the weekend, and I have a pretty light week until Thursday and Friday.

Wednesday night, the 3rd, is Madeline's birthday 9th birthday, and I plan to be 100% healthy by then! Thursday I have another panel discussion at UIndy, and then I'm driving up to Hammond Indiana for a speech on Friday. Friday morning I'll be giving the keynote speech at the Transition Conference at Purdue Calumet. It's an audience of approximately 300 high school students, many of whom have mild disabilities, who are about to transition into either college, or the work force. I'm honored that they want to hear my story!

Comments:
Wow -- how do you keep track of all these speaking engagements without a secretary? Maybe you should consider posting an ad. Who knows, it might take care of the single issue, too. ;-)

I'm sorry to hear you're sick. Today is Madeline's birthday ... are you feeling better? I hope so! I know she is such a sweet, fun part of your life. And we all know her birthday wouldn't be the same without her favorite uncle. Speaking of birthdays, seems like there might be someone else's birthday coming soon ... ;-)

Definitely feeling better, but really wiped out after the long weekend. For now my cell phone is my secretary, which doesn't help the single issue, but it's way cheaper!

Not sure whose birthday your referring to...I stopped aging years ago!