Life Gets In The Way 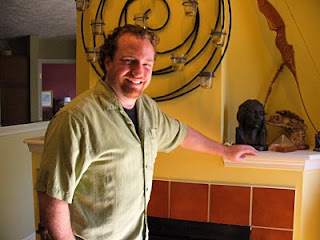 Yesterday, at church, a friend and regular blog follower commented to me about the fact that I haven't done an update since March 31st. She reminded me that there are many out there who don't get to see me often and simply want to know that I'm doing OK. With that in mind I will try to be more diligent about posting at least a couple times a month. I've even set a reminder in my phone for every other week!

It's been a while because, honestly, I just haven't been inspired to write. It's not that I haven't been doing interesting things, it's just that I've allowed myself to get bogged down with life and haven't taken the time to get my thoughts together. "Life gets in the way". How many times have I heard others say that, or said it myself? How many times have you said it? The problem is that when we let life get in the way we manage to let things slip through the cracks. We become so focused on the hear and now that we forget to reach out to each other, simply to say "Hello, I'm doing well, how are you?"

Last week, while I was driving home from a meeting, or an appointment, or a speech, or some other errand I drove past the neighborhood where my friends, John and Megan Coffin, live. I drive past their neighborhood at least a couple times a week and I always think "I need to call them", but I never do. So I finally listened to that voice in my head and gave John Coffin a call. I got his voicemail, but he called me back a few days later. Once we started talking I was amazed at how much time had passed. We live barely 10 minutes away from each other, and yet, a year had passed since the last time that we had spoken! The reason: "Life gets in the way".

I'm going to try to be better about reaching out to all of you through this blog. While that may mean that some future posts may be less inspiring, at least all of you will know that I'm still hear and that I hope you are still reading my thoughts! You can let me know that you are there by making comments. (The more comments that you make, the more inspired I will be!)

So, take a moment to think about those people in your life who you haven't contacted for a while. Those people who, when you think of them, you think "I need to give them a call" but never do. Put life on pause and pick up the phone, or send them an email to say "Hello, here's how I've been, how are you?"

(Oh yeah, the picture is for those of you who haven't seen me in a while. I haven't had my hair cut since last October. I realized that, for the first time in my life, I don't need to project a traditional professional image, so I decided to see what would happen if I let my hair grow. I was hoping that it would get longer, but it just keeps getting curlier and curlier! It's very difficult for me not to get it cut, but I'm really enjoying watching it change. The beard just kind of pulls it all together!)