Well, I can't let an entire month go by without a post, now can I?  The month of November began with preparations for my friend David Kay's wedding.  David met his new wife, Sarah, at the hotel where they both worked in Georgia a little over a year ago.  Ever the nomad, David rarely stays in one place for long, and he was lucky to find a woman who was willing to move with him.  They got engaged while living in Florida and planned their wedding to take place in Sarah's home town of Eatonton, GA.  A few months later they found themselves living in Northern Indiana, not far from where David grew up.  While honored to stand up as one of David's groomsmen, I secretly hoped that they would relocate the wedding to Indiana.  (As I have mentioned before, ever since the accident I feel a great deal of anxiety whenever I need to travel.)

If I get a call asking me to be in Washington DC (or some other distant location) the next day, I have no issues, but if I have time to worry over the details, I begin to feel like a caged animal searching desperately for a way out.  As the date approached I still had not made a flight arrangement and gradually came to realize that driving would be the best option.  It's that whole caged animal thing.  If I had booked a flight, the closest airport was Atlanta, which was still an hour and a half from Eatonton.  Once there I would need to rely on David's family, or other members of the wedding party, to travel the rest of the way.  I didn't really know any of these people and wasn't comfortable relinquishing my independence while so far from home.

This is where the anxiety really comes from...the perceived loss of independence.  The fact that I would need to rely on other people to move me, my wheelchair, prosthetics, crutches, and luggage from place to place.  David's friends and family are all wonderful people.  Any of them would have been happy to include me, and my needs, in their plans.  Six years ago I would have been happy to join these perfect strangers on a road trip, but then again, six years ago I could have rented a car to get from Atlanta to Eatonton without the worry of whether the vehicle would have hand controls that I could use.  (I'm assuming that it's possible to rent a vehicle with hand controls, but I've never looked into it, so I don't really know.  Even if it is possible, there are many different versions of this assistive tech and I'm not positive that I'd be able to drive with any style other than what I'm used to.)

David spent the night before the trip at my house and then he followed me in his car for eight and a half hours to Atlanta.  We were lucky to have beautiful weather for the drive and David and I spent half the time calling each other to point out funny road signs, amazing views, or to make fun of other drivers.  As we reached Atlanta, I stopped to spend the evening, and most of the next day, with my Uncle Michael, who is the Director of Orchestral Studies at Georgia State.  Interesting side note, my Parents were visiting him when the accident happened, and haven't been to Atlanta since (we think they're a little superstitious now).  David continued on to Eatonton and I got some rare quality time with my Uncle!

The wedding, which was held in a beautiful pre-Civil War era church was elegant and, thankfully, short.  The perfect amount of time for a Groomsman standing on a pair of prosthetics!  David's bride looked like a Disney Princess, the Bridesmaids dresses actually weren't hideous, and the tuxes, while very complicated with suspenders and vests and jackets and ties and pocket puffs, made the rough cast of characters on the Groom's side look quite dashing!  This was the first wedding that I have been in since losing my legs, and walking down the aisle arm in arm with my accompanying Bridesmaid took a little practice.

During the rehearsal we practiced with her on either side of me as I used only one crutch to walk.  (Walking with one crutch is normally not an issue, but walking with one crutch in a tux with dress shoes on is a different story all together, especially when you add a Bridesmaid and a chruch full of people watching!)  She would take my second crutch in her free hand and then give it back when we got to the end of the aisle.  We established that it worked best for her to walk on my left side (opposite the normal positioning).  However, while watching the Bridesmaids process at the beginning of the wedding, I realized that they each had a bouquet that they weren't carrying during the rehearsal.  She wouldn't have a free hand for my crutch!  At the end of the wedding I leaned forward to tell the Groomsman in front of me to take my left crutch when he recessed with his Bridesmaid.  We tried to do a subtle hand off, but he didn't have a good grip on the crutch and dropped it before he went to leave.  To the audience it appeared that he had taken my crutch away from me, which led to audible intakes of breath and an accusatory statement or two, then people calmed down and you could hear hushed questions and statements of "was that supposed to happen?" or "I think he was supposed to take that." and "Did he just take that man's crutch?"  We thought it added a nice comic moment to the end of a perfect wedding! 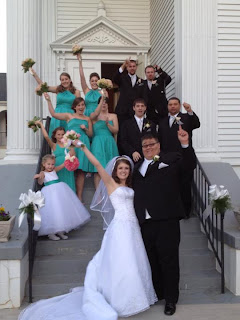 (I'm at the top right, I could swear I was smiling but, then again, I was also concentrating on standing at the top of the stairs and not knocking the whole weding party over like dominoes!)

On the drive home I didn't have the benefit of another car to caravan with.  Left to my own devices, I enjoyed being on my own schedule, stopping when I wanted, enjoying the beautiful vistas, and listening to my recordings of the NPR Star Wars radio drama and the NPR Empire Strikes Back, which originally aired in 1981 and 1983, respectively.  (I know, but I have to let my geek flag fly every once in a while).  Star Wars is a six and a half hour version of the original film and Empire is a five hour version, so even though I've had them for years, this was only the second time that I've listened to them.  Honestly, I'm not even sure I'd ever finished Empire before.  (I actually finished that and then listened to Return of the Jedi as I drove around town over the next few days.)  As I crossed into Indiana I stopped for dinner in Corydon, to visit with my friends Jason and Michelle Copperwaite and their seven children.  once i was well fed and had been entertained by the chidren, I finished the long drive.

The rest of the month was a flurry of activity, most of which is centered around my normal routine.  I also came down with a horrible cold that lasted for over a week and left me with a very scratchy voice from all of the coughing.  (Last Sunday at church I think I was singing in the Contra Base range!)  However, I did have the unique, and very special opportunity to visit with the Nursing staff at the Wishard Hospital ICU.  CTS (Community Tissue Services) contacted me several months ago to ask if I would be willing to speak to these Nurses about being a tissue recipient, as many of their patients do not survive and they see the tissue donation side of it, which is very sad, but never get to see the people who are saved by the donor's gift of life.  This was a rare opportunity that I had the pleasure of sharing with a kidney recipient and a cornea recipient.

Thanksgiving approached faster than expected.  This year I think I finally perfected my Sugar Cream Pie, which has become my contribution to the Warriner family dinner.  We've had three happy days of visiting with family and friends, fantastic food and drink, and even catching a movie.  As we sat around the table before the first bite, my father said a prayer, we toasted, and then each said what we were thankful for.  I said that I was thankful for the wonderful love and support that I have received from friends, family, and even perfect strangers over these past few years, which is true, but as I look back on the past year and really think about it, I find there is something else that I wish I had voiced on Thursday.  I could not be more thankful for my independence, health, and the ability to overcome my anxiety and adapt to new situations!

I hope that each of you who read this, be ye friend, family, acquaintance, or perfect stranger, had the opportunity to reflect on Thanksgiving, or even now these several days later, and see what is truly important to you, what gifts you have been given throughout the year.  I hope that you can see through the trees of your day to day life and see the beautiful attributes of the forest that has grown from your presence in the world.  I hope that you can see both the tangible and the intangible gifts, whether obvious joys or hidden strengths that come from surviving the challenges of the world, and be thankful.  Happy Thanksgiving!

Comments:
Greetings Jeremy- Happy Holidays to you and family! I'm working on finding the forest through the trees! Matt