Yep, last day of the month, again.  Given that today is Easter, I would be remiss if I did not wish a Happy Easter to all the Christians who read this.  I don't know what the weather is like in your neck of the woods, but in Indianapolis we were blessed with a beautiful day with mild temperatures.  A much needed respite from the cold weather and late March snowfalls that we've been experiencing.  Spring is here, but for some reason Winter just doesn't want to give up its hold just yet.  To prove the point, it's currently 62 degrees in Indy (That's Fahrenheit, for those of you reading this from any country that uses Celsius) but the forecast on my weather app still calls for a chance of snow tonight.  Now, anyone who knows me knows how much I love the snow, especially when it's falling, but enough is enough!

I have a rule that "once I see snow, the beard must grow".  That's how I determine when to stop shaving and let my winter beard come in.  (Believe it or not, but it keeps my face warm.)  I usually keep it until the first day that gets above 60 degrees, or until I get really sick of it, which also usually starts to happen when the weather starts getting warmer.  Indiana weather has always been unreliable, especially around the turning of the seasons, but it's usually a safe bet that if the weather gets above 60 then we're not going to see anymore snow until the end of the year.  This year my rule did not hold true.

The Sunday before my birthday was a beautiful day.  I had already been sick of the beard for a couple of weeks and was ready to shave back down to my usual goatee.  That particular Sunday was the first day that we got above 60 degrees so, naturally, the following day I decided to shave.  (I also figured it would be a nice surprise for my Mom if I showed up for my birthday dinner without the full beard).  While shaving I accidentally shaved a little more than intended and had no choice but to go fully clean shaven.  That hasn't happened in 5 years, and it was kind of shocking.

Here's what I discovered, as I was only two days away from 38 I was pleased to see that my face still looks pretty much like it did when I was 19!  Same youthful skin, with only a few laugh lines near the eyes.  A little bit more forehead thanks to a hairline that has receded a bit (but not much).  And, most disturbing of all, more weight in the cheeks and chin.  Still, all in all, not bad for a guy who's seen the particular stretch of road that I've traveled.

Ok, yeah, if I look close I can see the scars, but two of those are from my relatively early childhood.  One on my chin from when I was really little and Sarah chased me into one of the dinning room chairs, and one on my forehead from when Sarah was playing hop-scotch with a friend in our back yard and her friend's rock hit me in the head.  (Yes, I know that I had my role to play in those events, but it's always fun for the little brother to point the finger at his big sister!)  (For the record, the hop-scotch event is the moment that I learned that when I closed my eyes I did not become invisible and things would not pass through me...looking back that was a very important lesson for me to learn).  As for the other scars, well, I can tell where my nose doesn't exactly line up where it should and there are two tiny scars at either corner of my lower lip, that I can only assume came from tubes that went down my throat before my jaw was wired shut.  I really don't know where they came from, because I was asleep during that time.

So, after looking closely at my freshly clean shaven augmented 19 year old face I turned around and saw snow flying past the window.  Which, of course, meant that it was time to start growing the beard again.  That was just as well, because facial hair does a decent job of blending over the extra weight in the cheeks and chin!  Two days later I walked in to my parents house for my birthday dinner with just a little stubble on my face (takes about a week or so for my beard to come back in), so Mom didn't get a completely clean shaven son for the evening, but she could still see her baby boy's face.

The weather has continued to waffle between kind of spring like and bitter cold with considerably more snow than we're used to during this time of year.  The result, I've had a nasty cold for the past week or so.  Thankfully, Mom and Dad gave me a hooded fleece Jedi Bathrobe for my birthday that I spent most of last week wrapped up in on the couch.  (It's awsome for when you're sick!)  I'd swear there were days when I thought I had the plague, but I think I'm mostly past that now...mostly.  Even with the sickness though, its been a very fun and productive month.  I've made more headway on a particularly personal project than ever before, had a few speaking engagements, and have also made more time to practice my Grandpa's guitar (I can now actually make it sound musical...not as musical as he did, but musical).  So far 38 is off to a great (though sniffly) start! 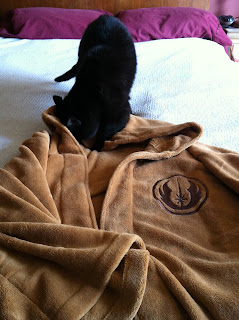 My black cat doing her best impression of Darth Vader after striking down Obi-Wan Kenobi!
﻿

Comments:
Happy birthday month, Jeremy, and glad you celebrated the turning of the seasons, despite the fact that it seems to be turning...and turning...and turning...
We have month-old barn kittens. And this is the week when they are usually born, not the week when mama is leading them around to new quarters on their own four feet!
I am glad to hear of your progress on Uncle Dale's guitar; I can still hear him playing that beautiful instrument that sounds so amazing. (And he made it seem so easy!) Keep plucking!!
Florence

your information is very nice....I have related informationCOMMERCIAL WASHING MACHINE MANUFACTURERS
it is very usefull to us....