How It's Supposed to Work...

So, first a quick update on the topic of my last blog post.  I didn't post in May because I was super busy, it was a confusing month (more on that sometime in the future), and I was actively looking for a therapist.  Good news, I found one that I like and have begun the process...so far so good.  I did not write a blog post in June because I was busy, was trying to learn a solo guitar version of Wonderful Tonight by Eric Clapton in time for my girlfriend's birthday party (mild romantically comical success), a lot happened in the world (more on that sometime in the near future), and I've been more interested in writing my book than I have been in writing social commentary.  Yes, progress on my creative work has begun once more...so far the hell-mouth in my stomach has remained blessedly shut.  Now, all that being said, something did happen during the past two weeks that I feel the need to comment on...

As I believe I have mentioned, several months ago I began swimming laps several times a week at the local JCC.  It's taken a great deal of commitment, but I have finally reached a point where I am consistently swimming a half mile three days a week (or a mile and a half weekly).  While I have also made strides to improve my average diet as a result of last year's type 2 diabetes diagnosis, I believe that in my case the exercise has made the most significant impact...so much so that I have recently been taken off of the medication, as my pancreas seems to be doing its job quite well on its own!  As a result of this wonderful news I have made it a point to get to the JCC every Monday, Wednesday, and Friday morning, rain or shine.

Two weeks ago I went early to get a jump on my day and finished my half mile swim in record time (for me).  Moving quickly out to the parking lot in my wheelchair, I was looking forward to getting home for some quality writing time when I discovered a white Porche parked in the hashmarks between my "handicap" accessible parking space and the next one.  Of course, I had parked with the hashmarks on the drivers side of my car so that there would be room for me to safely get my wheelchair out of the car, put it together, and transfer to it.  This fancy Porche was too close to my drivers side door for me to safely get in the car, and even if I could swing it, there was no way that I'd be able to take the wheelchair apart with out causing damage to both vehicles in the process.

Annoyed, I turned around and went back inside to ask for help.  The helpful young woman at the desk paged the security guard who, once he'd made his way to the front desk from where ever he had been, walked out to see if he could help me get in.  On the way to my car, which was at a different entrance because there had not been any accessible parking spots available at the end of the lot closest to the health club, the security officer (who was an off duty police officer) said that he "would give them a ticket, but management doesn't like to upset the members."  The officer was quite nice and was able to spot me as I swung my body from the wheelchair to the drivers seat.  He then listened to my step by step instructions to take my wheelchair apart and handed me each individual piece.  I left the lot 40 minutes later than intended and frustrated that most likely the owner of the Porche (which did not have any kind of disability placard or license plate) would never know what an inconvenience he or she had caused, or how close they'd come to a busted windshield (because I was mad enough to smash it)!

A few days later I received an email news blast from the JCC and I responded to the marketing manager with my tale and requested that something be said in upcoming communication about not abusing the accessible parking spaces or the hashmarks between them.  She replied that day saying that she'd be happy to do so, but unfortunately could not guarantee that the Porche owner would read any of their communications (which is understandable).  I replied that I appreciated anything that she and the JCC could do in regards to access and inclusion...and for the record, they are already very accessible, which is why I swim there.  When I went for my swim this past Wednesday I was surprised and pleased by the following sight! 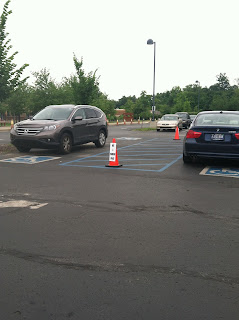 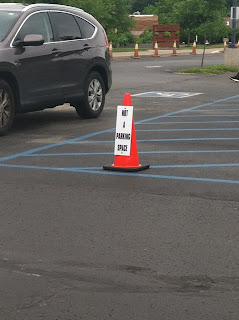 What an awesome response!  In my decade as a person with a disability this is by far the quickest and most effective response by an organization to an accessibility issue by that I have ever seen!  Great job Indy JCC; this is how its supposed to work!﻿

Comments:
Hooray for a responsive business!!
I occasionally put the car in handicap IF my friend is with me and has her hang tag AND she is having a bad day or the weather is hazardous to her footing. Most of the time we choose to park farther out and walk (or, as she says, take George for a walk.) Her last job before the grant ran out was going around and noting ADA compliance regarding parking, access, and restrooms so I have gotten a pretty thorough education on the subject.
You have made some great progress with the guitar and I'm glad to hear that more parts of your life are moving in a positive direction again.
Cousin Florence